Three-quarters of capped households are capped because of the introduction of the new lower cap levels, according to new DWP statistics.

In ‘Benefit cap quarterly statistics: GB households capped to May 2017‘, published today, the DWP highlights that the introduction of lower cap levels have increased the number of capped households to 68,000 as at May 2017 and that, of these, 52,000 would not have been capped if the cap levels had remained at the pre 7 November 2016 levels. In addition, 77 per cent of capped households now live outside Greater London compared to 60 per cent as at November 2016. 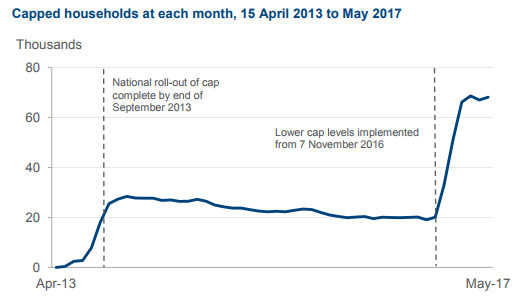 Of households subject to the benefit cap –

For more information see Benefit cap: number of households capped to May 2017 from gov.uk

This entry was posted in Social welfare. Bookmark the permalink.